NOTE: In case you missed it, I wrote a bit about why I pack so much into each post (when I could just be writing listicles) called “Why My Posts Are So F*king Long”.

In the ten days we spent in South Korea, I ate more fried chicken than I have probably consumed in my entire life. (More on that later.) If you want to skip down to the “Top Things to do in Seoul” part, click here. If you’d prefer a more in-depth view of the culture and customs, keep reading!

I never realized how little I knew about South Korean culture until I visited. Our good friend, Dan, met us over in Seoul. Dan encompasses so many qualities that are hard to find but are necessary for a long-term friendship (with me, at least): he’s always quick to set down his pride and admit he was wrong, he’s a fantastic listener, and he’s just ridiculous enough to keep things interesting. If I could give you a Dan for Christmas, I would. (Plus he took all the photos in this post!)

Once we all met up in Seoul, one of the first things we did was go to a grocery store since we were staying at Airbnbs and wanted to do some home cooking. I was immediately struck by the sheer quantity of mirrors I passed around town. They. Were. Everywhere. On the street, in the metro, and in the aisles of the grocery store. Several people even had mirrors on their phone cases. As a cause, consequence, or coincidence, I noticed that everyone seemed very put together and freshly pressed. I don’t remember seeing many women (or women) that weren’t wearing makeup. Everyone was very stylish but I didn’t see much diversity in fashion. There didn’t seem to be much of a counterculture in terms of outward appearance, at least. I imagine some of it may have to do with the fact that South Koreans have the most plastic surgeries per capita on earth and skin whitening products are ubiquitous. The pressure to keep up appearances is so insidious that I even noticed “etiquette bells” in several public restrooms (only in the women’s stalls, of course…) which mimic the sound of flowing water to cover up any “unladylike” toilet noises.

After having visited bathhouses and bathhouse culture in Iceland and Japan, we felt that it was only natural we should go to the local jjimjibang (bathhouse) while in Seoul. If you’ve never been, I highly suggest it. After you go in, you go to the changing and bathing rooms which are separated by gender. Once you pay, you put your shoes up and in exchange are given the same pajama set as everyone else and keys to your locker. You strip naked, sit on a bench to wash yourself, and enter the spa pools: all in a completely communal and open space. In the spa area, there’s usually a few different baths that are of varying temperatures and infusions: a warm, yellow mugwort tub, a piping hot jet stream bath, an ice bath, etc.

I have never felt so vulnerable in my life. Here’s my brown ass, standing stark naked except for my locker keys and a face towel, looking around in bewilderment trying to figure out which order I’m supposed to do this in without being accused of oogling. In one corner, there are older women in black lace bra and panty set straddling young women and trying to, what looks like, scrub their girls’ epidermis off. I tried to soak in the 42 degree Celsius tub which seemed the least overwhelming but three aunties had clearly made this their territory and didn’t want some neophyte muddying the waters so I stepped into the adjacent tub instead. Little did I know, I had accidentally submerged myself in the ice-cold water bath. On top of all this, I agreed to meet Robin and Dan on the second floor in an hour but since I have no phone or no clock, I’m supposed to gauge my time magically. Eventually, I managed to relax and soak the experience in; I even learned to appreciate the beauty of women peacefully communing in their most exposed and vulnerable states.

The experience seemed to go a bit different for Robin and Dan who were lured onto the scrubbing tables soon upon entering upon which were pummeled and scoured for an hour, scarcely able to even enjoy the baths. After we met up, Robin and I decided to join Dan in the communal sleeping room (yes, we went for the full experience and stayed overnight) but we were intercepted by a very angry South Korean man. He whisked Robin away so I didn’t get to see the action first hand, but through group translation efforts in the lobby, Robin managed to understand that the scrubbing wasn’t a free service and they were accusing Robin and Dan of profiting without paying. Never a dull moment…

Then there were a few run-of-the-mill oddities that just can’t be explained, even by the locals. Such as the several storefronts that presented a hodgepodge of prosthetics without explanation or pricing next to car repair shops. 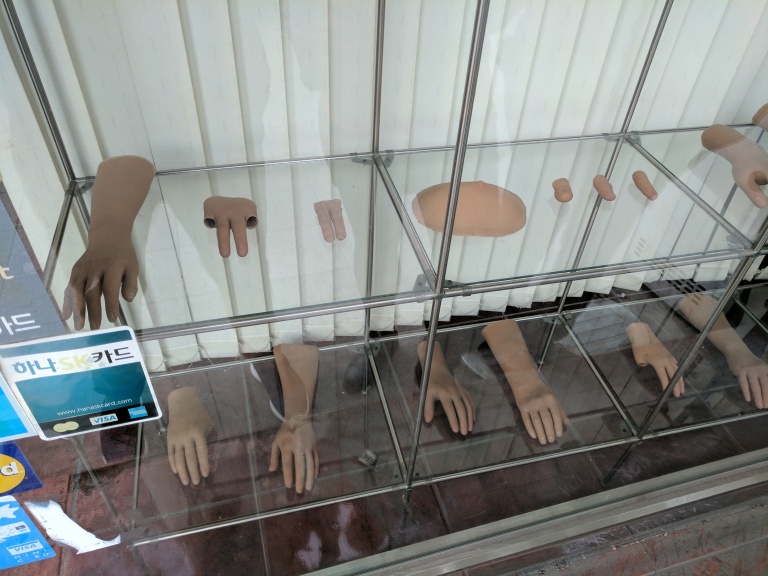 To prep for the trip, I read Han Kang’s The Vegetarian on the plane. While I didn’t love the book, I recommend it to get an idea of some of the social tensions floating around their atmosphere. There are reasons why in this dystopian novel, the choice to not eat meat is seen as such an incredulous act: there are about 50,000 fried chicken restaurants throughout the country and the average Korean eats more meat per capita than their Chinese and Japanese neighbors.

Why? Around 1997, South Korea was reeling from the Asian Financial Crisis and needed a way to jumpstart its growth and retain its newly acquired wealth. (It also accounts for the rise in K-Pop, as you’ll see further on in my post.) The crisis caused heavy unemployment among middle-aged men who in turn decided to open fried chicken franchises, lured in by the “low initial investment, overhead costs, and little to no food industry experience required”. Unfortunately, the franchises seem to have offered little more than a short fix for a long-term problem; the owners rarely make a profit but can’t close their businesses because they would lose everything, including their houses which are often set as collateral on their loans. About half of the chicken restaurants in the country end up failing each year but the weak job market for recent graduates keeps drawing in new franchise owners.

Yes. That is a steak cup over your drink.

There are more coffee shops than you can shake a fried chicken stick at. In the mornings near business districts and universities, I saw several women with food carts peddling iced coffee. Like the grounds you forgot you left in the French press for 20 minutes, the coffee market in South Korea is ridiculously oversaturated. The number of coffee shops in South Korea has tripled from 2011 to 2015 – far faster than the overall consumption of coffee. In fact, Seoul has more coffee shops per capita than Seattle or San Francisco.

Near Hongik Unversity, I saw a “rent by the hour” sign that caught my attention and followed the stairs until I arrived at a very cozy looking space with bunks, pillows, books, and a coffee shop. I tried to deduce what it might be for but I gave up and just asked the shopkeeper instead. She patiently explained that young people often rent the space for an hour or a whole night either with their friends or alone, reading and snacking, sometimes for a whole night. 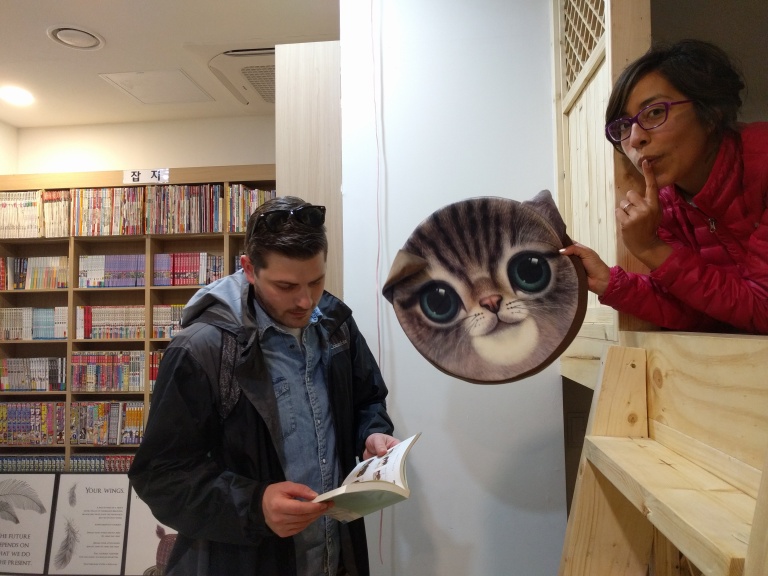 Due to the fact that so many South Koreans live at home with their parents until they’re far into their 20s, there’s a widespread of activity spaces you can rent by the hour to have some privacy or just to hang out with friends. For example, you can find noraebangs (karaoke rooms), PC bangs (internet cafe rooms), DVD bangs (think personal home theatre), and Manhwa bangs or cafes (comic book rooms).

It was quickly apparent how much KakaoTalk, a free mobile instant messaging app for smartphones akin to WhatsApp, is a strong fixture of the culture. In fact, of all messaging service users in South Korea, 99.2% used KakaoTalk according to survey data from October 2016.

We saw a Kakao Concept Museum and Store, near the manhwa cafe I mentioned above, that had recently opened (December 2016). I walked around, equal parts amused and befuddled, trying to understand what the hell so many adults were doing snatching up as many cartoon character-riddled goods as they could. The store was open to all but the museum admission was 7,000 won and required prior reservations so we decided to pass on that part. According to Funtastic Korea, the exhibit focuses on Kakao Friends (the emoticons created for the KakaoTalk app) and describes each of the eight character’s backstory with an emoji wall, sculptures, and concept sketches.

While doing some research on Kakao, I came across the portmanteau “kidult”: an adult with interests traditionally reserved for children. Even though Korea has been experiencing a decreasing birth rate since the 1960s, which many attribute to the taxing (over)work culture, the Korean toy market continues to generate annual sales upwards of 700 billion won.

I’d be remiss if I didn’t mention the pervasiveness of K-Pop not just in South Korea but worldwide. I remember in one of my former jobs, my Malaysian-born boss told me that the South Korean government “created” Korean Pop the widespread phenomenon it is today, which I had a hard time believing. Well, she was right.

As I mentioned earlier in my post, the Asian Financial Crisis created waves of change in South Korea. Then-president Kim Dae Jung chose the entertainment industry over traditional manufacturing as a way to boost the economy. As a plan of attack, the government siphoned funds into the Korean Film Council, established the Korea Creative Contents Agency, and even called upon universities to help produce new pop stars. The successful exportation and translation of K-Pop worldwide promoted Korean culture and helped bring in more tourism and business. In turn, it produced a relatively benign “success story that didn’t carry the baggage of war and imperialism”. Nowadays, you can even find the pull of K-Pop on Nickelodeon; “the new show ‘Make it Pop’ is a musical sitcom [based on three teens] who start a band called XOIQ”.

Lastly, I’d like to give a big 고맙습니다 (thank you!) to my friend, Yookyong, whom I hadn’t seen since high school! She was a sweetheart and an excellent tour guide who was patient enough to answer all of our annoying questions. 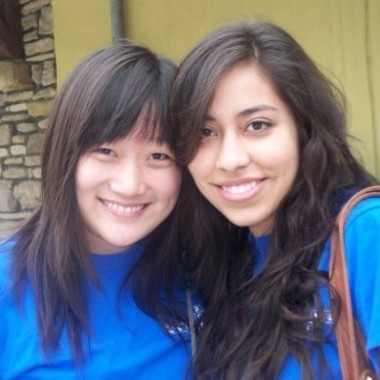 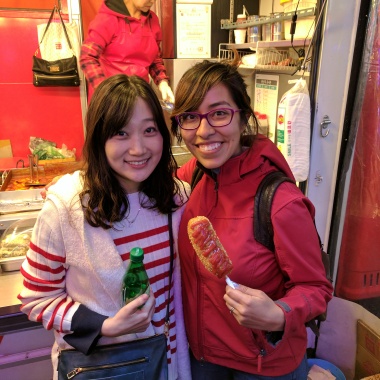 All in all, South Korea was fascinating and taught me a lot about how homegrown companies and customs can thrive without completely letting Western culture seep in. While I’d have to cross a few more countries off my list before heading back, their beautiful national parks offer a strong argument for a return trip. 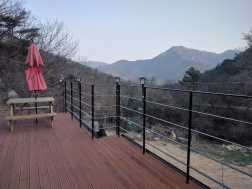 Songnisan National Park – We wanted to visit two national parks and managed to find an Airbnb that was reachable by bus from Seoul. We were in an isolated location (at least for people who didn’t have a car) but it was so great. Our lovely host spoke no English but he had soju, spam, and a grill plus we came armed with Google Translate and beer so we got along just fine. Daemun peak took about 5 hours including the time it took to have a picnic and take pictures.