I’m writing this while seated on top of a rock jutting out from the sandy coastline, just a stone’s throw away from the jungle. I’m joined tonight by a giant grasshopper, four crabs, and the few raindrops that signal the impending and much awaited last storm of the monsoon season. While this view is automatically idyllic for most, for me, island life has been an acquired taste. 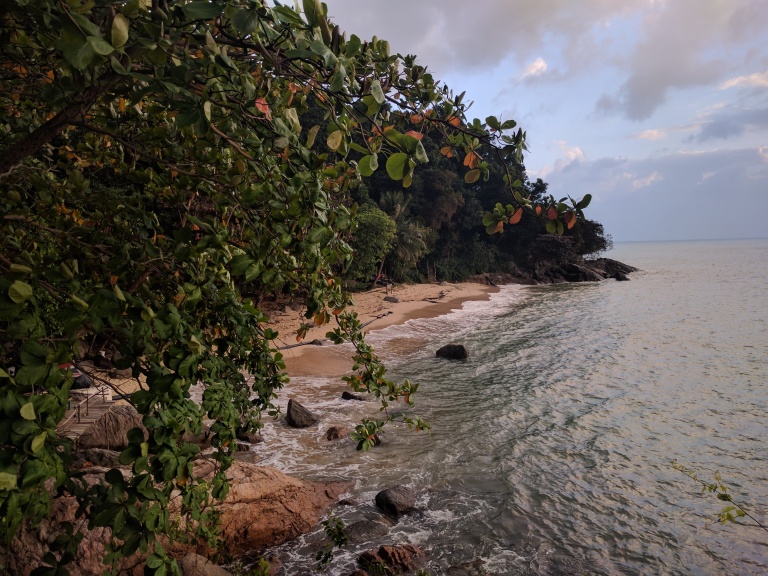 I’m not one to “lounge”. I hate naps. Hammocks are okay for five minutes but then I just feel like I’m in a straitjacket. I don’t really like the sticky coating on my skin that’s made from a combination of salt water, sunscreen, sweat, sand, and humidity. However, after seven months of non-stop travel, where every other week if not day is comprised of planning where we’re going to sleep for the next few nights and what we can afford to eat that day, it’s been beyond sublime to not think, not plan, not do.

We chose to visit the “small island”, Pulau Perhentian Kecil because we found a cute and affordable camping accommodation between the jungle and the beach. Rainforest Camping has been the perfect place to hang our hats after long, lazy days of exploring the island. What we didn’t realize, is that we came during the off-season, and more specifically, the monsoon season. On the plus, we have the island practically to ourselves and prices are more affordable. We booked our tent through Airbnb which was a reasonable 60 RM per night including breakfast. I’m sure we could’ve found cheaper but you can’t beat showering outside with a nice view of the jungle and falling asleep in a big tent to the sound of the waves.

Unfortunately, littering seems to be a continual struggle on the island. Apparently, it’s been better since the waste management services started; now, a boat passes by every few days to pick up the black trash bags left on top of assigned white containers. However, the problem isn’t completely solved, we saw quite a few people burning trash and there are some paths that are almost impossible to walk on because of all the styrofoam and plastic bottles. 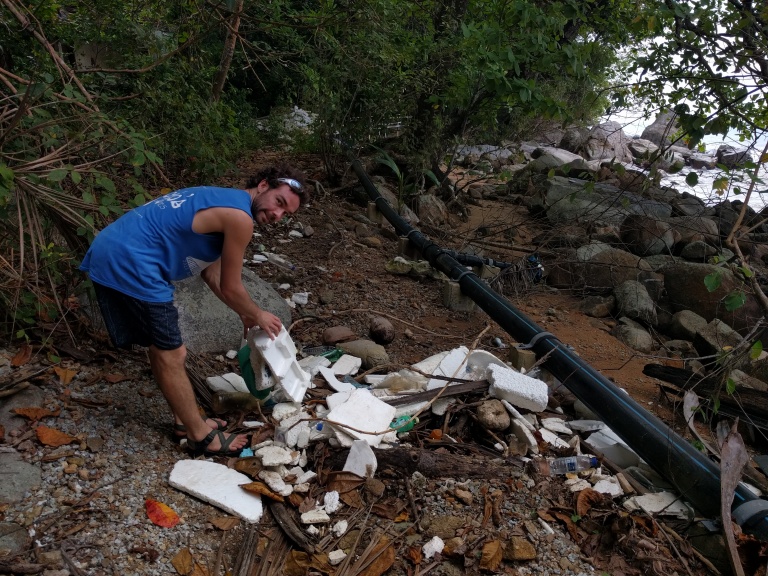 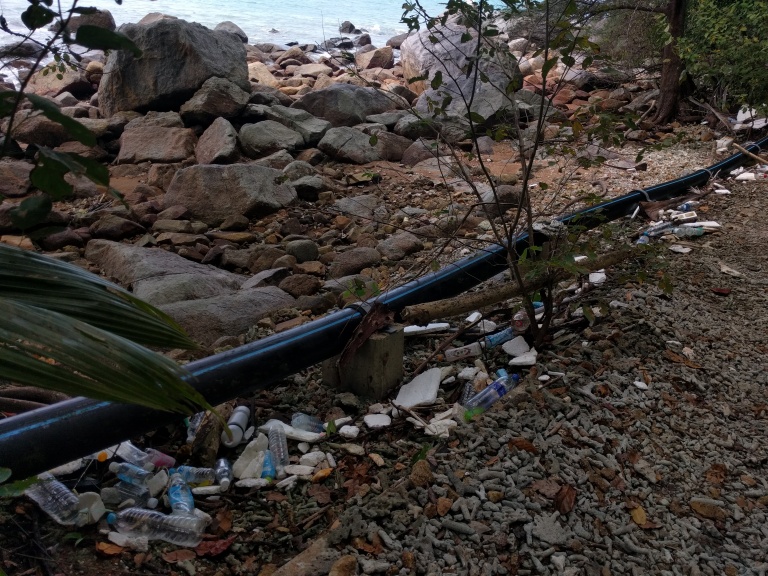 Ergo, we offered Adi, the owner, to clean up the beach in exchange for a cup of coffee at breakfast and to my surprise, he agreed. (Now, when I say “we offered” I mean Robin did. I’m still learning to let go of pride and as such, it’s difficult for me to ask for things. I usually come up with 10 reasons why the other person should say no rather than just trying and letting them decide for themselves.)

As we were coming to the end of our beach clean-up work for today, Adi came up to us with a plate of homemade cake and sweet corn crepes. I almost declined because I felt we had an equal exchange and he had no reason to offer us more but since we’ve been skipping lunch for the past few days to stretch our money, hunger beat pride and I obliged with a smile. Over our snacks and tea, we learned that he’d been working on the island for a few years before he decided to open up his own place. Although it only took him three months to build the reception and lounge area, he said it took him SIX months just to clean up the beach. “You see, this part of the island was practically uninhabited so people usually just threw their trash here. You couldn’t even see that there was a beach,” he tells us over coffee.

Now, the place looks completely different. The are several lounge areas, hammocks on the beach, a small rock climbing wall that leads to a sunset viewpoint, a dining area, reception, kitchen, etc.

I wake up whenever, eat my free breakfast of toast (although to our advantage, today it was Adi’s homemade flatbread; the provisions boat never arrived because of the weather), and I take a dip in the warm sea. We’re usually alone on the beach. Sometimes a person or two will nap in a hammock or pass through to reach the other beaches but it’s usually just us playing frisbee or reading.

At night, over on Coral Bay beach, the pricey Ombak Cafe shows a free movie with the understanding that you’ll buy a drink or something to eat. One night we splurged and shared their 22 RM chicken satay with peanut sauce and coconut-rice cakes, while yesterday we split a coconut-vanilla shake. Each was exquisite. The only downside is the long walk back to our campsite in the dark at high tide.

On a night we were too tired to do the 50 min walk to and from Coral Bay, we had dinner at our cozy outdoor abode. We had hesitated since at 20 RM per person, it was a bit more expensive than other dining options but it was completely worth it. We had HUGE portions of the most delicious barbequed chicken I’ve ever had in my entire life. Adi made his own peanut-based, sweet and spicy barbeque sauce that was perfectly seasoned with fennel and anise. Even if you’re not staying here, I would recommend stopping by to grab a bite.

For hearty, delicious, and affordable dining options, we found that Ewan’s Cafe is a great choice. It offers WiFi plus the locals eat there too. So far we’ve tried their mushroom-veggie-egg saute (Foo Yong, 11 RM) with rice and their 8.50 RM chicken sandwich with fries (I know it’s not local food but sometimes you crave something familiar, you know?). It’s also in between Coral Bay and the post-apocalyptic looking Long Beach.

On one of our exploratory trips, we discovered the latter beach which featured trash everywhere, faded “Red Bull – 5 RM” signs, decrepit shacks and major waves. Adi explained that the monsoon season brings such storms and waves that every year, the Long Beach businesses have to rebuild all the beachfront properties. Every. Single. Year. We asked why the businesses didn’t explore moving further back but the land is privately owned by someone planning to build a large resort.

The only major downside of the island so far has been the extremely choppy speedboat ride to get here. The going price is 70 RM per person round trip but we managed to haggle it down to 50 RM. It was an hour long and I felt every single minute of it. I ended up badly bruising my arm and ankle from trying to create some suspension to soften to blow of landing after the big waves. A few times we sustained such airtime followed by landing so hard that I was certain the guy next to me was going to throw up or that we would capsize. However, it’s relatively safe because the locals know the water and probably won’t risk taking you out if it’s dangerous. We were also here during the tail-end of monsoon season so the water was much choppier than usual.

Regarding the not-so-wild life here, at the beginning of the island’s development, a man brought over a monkey to the island to help him grab coconuts. He ended up accidentally losing the monkey and felt so bad about him being lonely that he brought over a female monkey. Naturally, they reproduced and since the monkeys aren’t native to the island they have no real predators here and have become rather aggressive. In fact, Adi had to adopt two dogs to help him keep the monkeys at bay; in 2015, he had to replace the bathroom area mirrors SEVEN times because of the monkeys constantly breaking them. We’ve also been able to spot monitor lizards, green snakes, and squirrels. 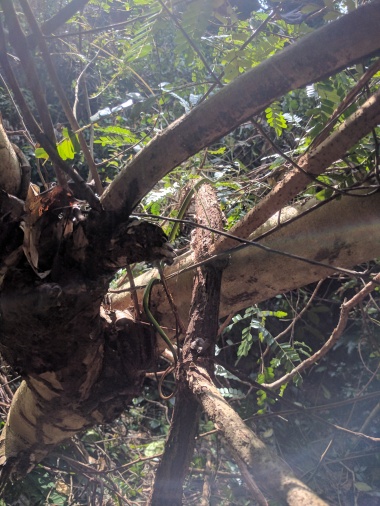 This island is so charming it’ll win over even the least tropical-minded of you. If you do come here, please pack a trash bag or two in your backpack and do your part to help keep the area clean. Please don’t buy plastic water bottles. There’s a big pipe that supplies freshwater from the mainland to both islands so you can just bring your reusable canteen. As for snorkeling, a German couple we met did Rainforest Camping’s long tour which features several stops includes a trip to Fisherman’s Beach to grab a cheap lunch. They got to see everything they were promised such as sea turtles, reef sharks, coral, etc. during a 5-hour trip that costs 50 RM per person.

Conversely, feel free to come and do nothing. Absolutely nothing. There’s virtue in that too, sometimes.